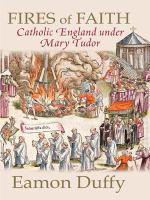 Description
The reign of Mary Tudor has been remembered as an era of sterile repression, when a reactionary monarch launched a doomed attempt to reimpose Catholicism on an unwilling nation. Above all, the burning alive of more than 280 men and women for their religious beliefs seared the rule of "Bloody Mary" into the protestant imagination as an alien aberration in the onward and upward march of the English-speaking peoples.
Also in This Series