How to run a railroad: everything you need to know about model trains
(Book) 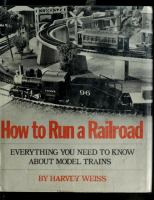 Description
No book tells the story better than this new, centennial edition of ALL ABOARD!

One century ago, Joshua Lionel Cowen created his first electric train. A simple open wooden box on wheels, its sides stained red and printed with Electric Express in gold lettering, it was intended for shop windows where, loaded with goods, it would advertise a store's wares. But as it turned out, customers coveted the train, not the cargo, and Cowen discovered a new business.

And as it turns out, there's a picture of an Electric Express on page 29. Because ALL ABOARD! is the definitive illustrated history of Joshua Lionel Cowen, the company he founded, and the electric trains that for decades were synonymous with boyhood in America. Originally published in 1981, it has been revised and updated for Lionel's 100th anniversary, capturing the spirit of a company remarkable for its resilience and dedication to innovation-traits that continue to define it even today.

Here are the steam locomotives that puffed real smoke. The flashing diesels. The lifelike accessories from the milk car delivering milk cans to operating semaphores to billboards advertising Baby Ruth Candy. And the glorious full-color catalogs that brought the Lionel world to life and mesmerized kids and their fathers alike. Jump on board for a ride through Lionel's grand history-and a glimpse into the future of toy trains.

RON HOLLANDER directs the journalism program at Montclair State University and was judged the best college newspaper adviser in the country. He was a Fulbright Scholar for two years in the People's Republic of China and returns frequently to photograph China's steam locomotives. He was featured on the History Channel's special on Lionel Trains. His reporting has appeared in The New York Times, The Los Angeles Times, The Washington Post, The Chicago Sun-Times, The Boston Globe, Newsday, Town & Country, The New Republic, and many others.

Also in This Series

Weiss, H. (1977). How to run a railroad: everything you need to know about model trains. New York: Crowell.

Weiss, Harvey. 1977. How to Run a Railroad: Everything You Need to Know About Model Trains. New York: Crowell.

Weiss, Harvey, How to Run a Railroad: Everything You Need to Know About Model Trains. New York: Crowell, 1977.

Weiss, Harvey. How to Run a Railroad: Everything You Need to Know About Model Trains. New York: Crowell, 1977. Print.

Note! Citation formats are based on standards as of July 2010. Citations contain only title, author, edition, publisher, and year published. Citations should be used as a guideline and should be double checked for accuracy.
Staff View
Grouped Work ID:
70d530c6-c370-d9eb-9119-aa6a9b8ba383
Go To GroupedWork